Now recognised as one of, if not the hardest winter 100 mile ultra marathon which runs from Coverack to Porthtowan along the rugged Cornish Coastal Path.

Last year we had rain, snow, hail, wind and freezing temperatures, so to finish in 30 hours 59 mins in the top 40 was very pleasing.

This year I’d done lots more studying of the route because it’s not marked very well and at night it’s very easy to go off route on the multitude of paths that lead inland, to coves, beaches etc (as I discovered last year). I was better rehearsed for the race as were my crew Nick Jukes & Dan Jukes who did a brilliant job of feeding me, keeping me moving, changing socks and shoes and keeping me updated on the race, weather conditions and distance to next crew point. 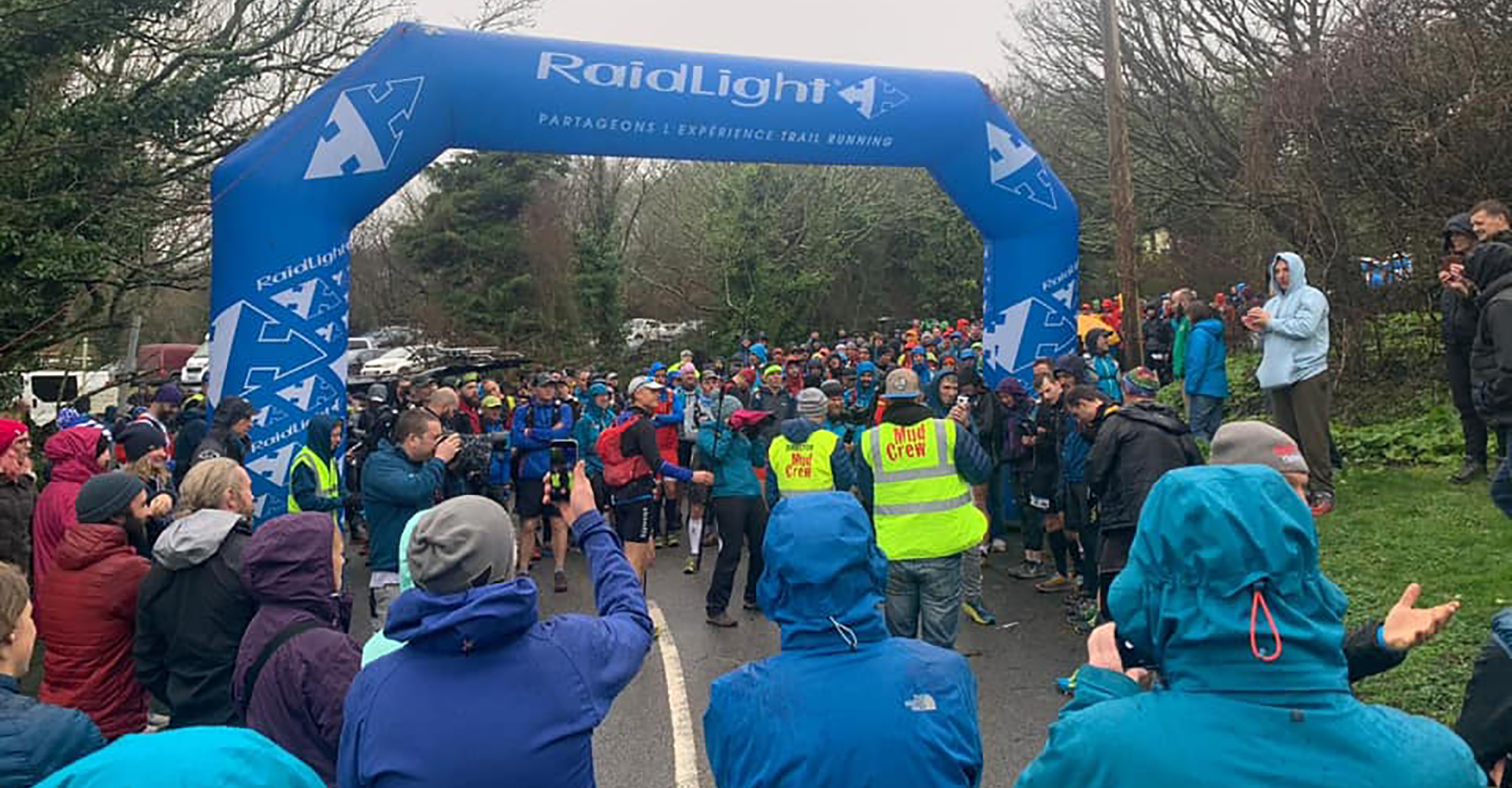 Weather was much milder this year with and average temp of 10 degrees the forecast was rain from the start which did eventually turn into drizzle for most of Friday and cleared early morning. There was more rain expected early hours but that never arrived, and Saturday turned out to be a lovely sunny day, much cooler but clear and still a strong headwind. Last night the rain came down from about 19.30pm and got heavier until cut-off at midnight, so we all came in to the finish rather damp.

Under foot the trail was very muddy with lots of standing water and thick mud, those of you who have run cross country races like Parliament Hill would appreciate the mud levels. The trails are sometimes very narrow with no option to stride around the wet mud and water and too long to leap over, especially with tired legs. So you have no option but to just go through it, which means wet and muddy feet from the start. This also meant lots of slipping and sliding on areas where you would ascend, descend or navigate cambered slopes.

The nature of the coastal path means that there is a fair amount of clambering and climbing over rocks and boulders. You are also faced with sets of stairs that have been there forever and require a ladder to get up and down. Where stairs have eroded away, often there will be a metal pin sticking up through the ground which you also need to be careful on, I opted for poles again this year as they help tackle some of this tricky terrain however I often suffer with back ache and early on dropped off a rock trying to stay upright and jarred my back and required a few paracetamol over the rest of the race.

With it being a winter race, you are only running in about 15 hours of daylight and because of the technical trail most of this is head down looking where you are going. Night running requires a good head torch and your wits about you as at some points you are on the cliff edge and staring straight down into the sea below which is sobering! Then every now and again you are reminded by signposts “Danger mine shafts, please keep
to the path” apparently lots of dogs fall down these.

The race offers ‘official’ checkpoints at Porthleven, Penzance, Lands End and St Ives but your own crew are unable to attend these so our race plan was to meet prior to each of the main points to fuel, hydrate and change anything that wasn’t working. 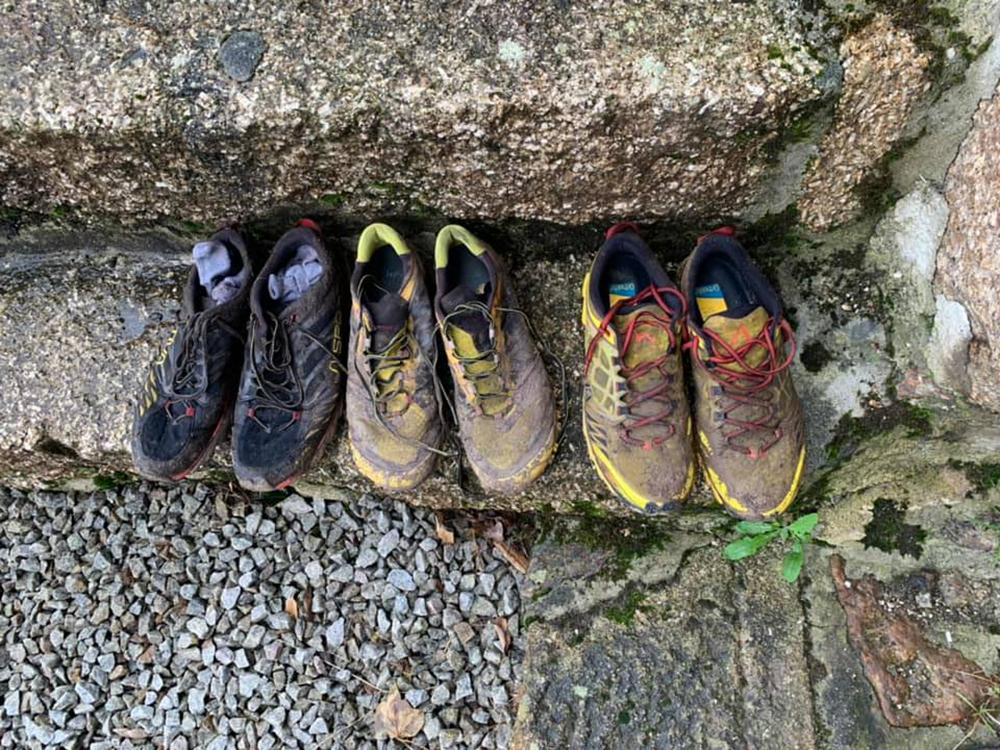 With so much mud and water I definitely needed a sock and shoe change at 23 miles as my feet already had two hot spots, so we did a shoe and sock change there and took on some nutrition and bottle changes, and this carried on well for the rest of the race with 4 shoe changes and a five pairs of socks. I packed six individual bags which had a complete change of clothes if required and I gave my crew a sheet of paper with each item listed as a description and which bag it was in so they could quickly lay hands on anything specific which worked really well.

This meant that I didn’t need to use any of the official checkpoints and our plan was to save me some time as it was quicker for me to see the guys at the roadside than sit down and get comfy at a checkpoint, last year I sat at Lands End for at least half an hour.

There was so much mud, I was stepping into shin deep slurry, then stopping at various streams and standing in there to wash the shoes and socks off best I could to stop any foot problems, this didn’t work and I ended up with a few blisters, one of which had popped and was loving all the wet muddy puddles and didn’t sting at all. This along with my back had started to contribute to me loosing some running time in the latter stages of the race.

Nutrition is something quite hard to get right, no matter what I try and plan, once you are running you often just loose any appetite and everything becomes unappealing. We bought noodles, crisps, fruit, porridge, chocolate, cereal bars, pepparami, hot cross buns, Ribena, Coffee, Tea, Hot Chocolate, Lucozade, San Pellagrino and some electrolyte tabs etc. I tried to vary the intake but when you burn 11,200 calories and your body can only really take 200-300 calories per hour sometimes it’s easier to take fuel through fluids. Although the Dominoes at Penzance was 👌🏼

I wanted to break 30 hours after last years 30.59 finish and my navigation errors, that’s why I came back and why I decided to race it again. My navigation this time was near perfect, time stopped at crew points was efficient and short, but time was lost on pace after Lands End. I haven’t yet compared pace on 2019 but I was lower down the field from the start and felt my pace was comfortable for a sub 30. My crew said a few times early on I was moving around 25 hour pace which gave me a little concern so maybe I slowed a little but the infamous section between Pendeen Lighthouse and St Ives stops you in your tracks as you pick your way through the rocks and I think it’s highly likely that my race plan was undone at that point. So Plan B was simply to finish so after realising a sub 30 had gone, I took my foot off the gas and took it very easy to the finish as I had lots of time on my hand to be inside the 36 hour cut off. 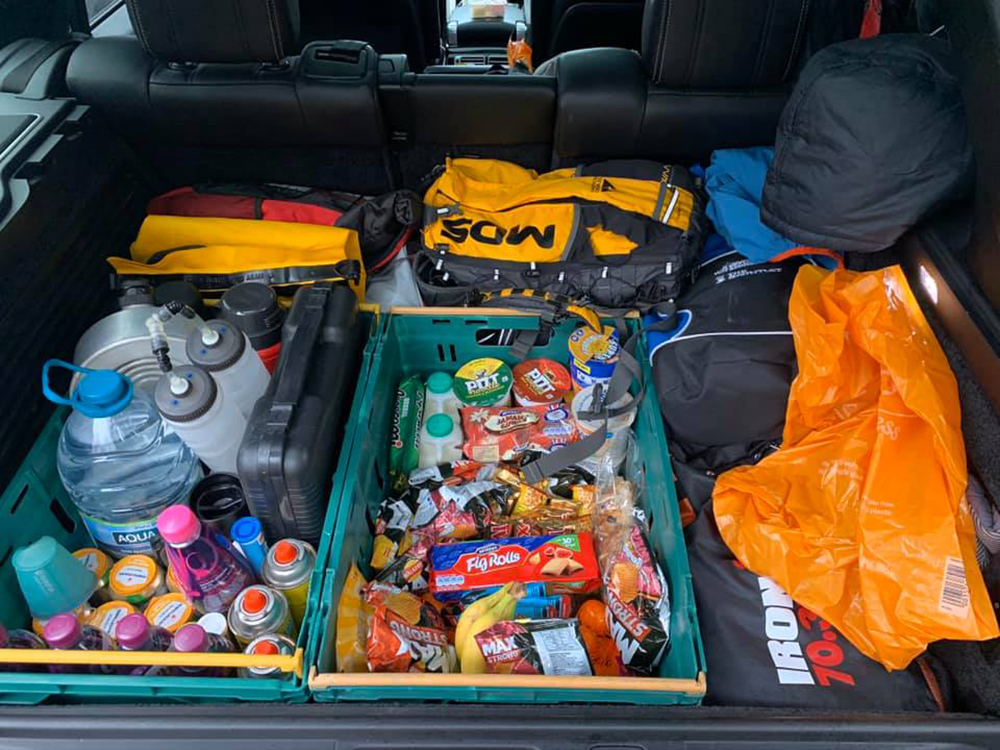 I only really had one dark patch and that was when I met the guys at Pendeen, it was still light but very cold and blowing really hard and my feet were bad. I climbed into the back of Nick’s car and sat there shivering for about 20-25 mins before putting an extra jacket, gloves and hat on and heading out. The only lift was watching Nick get out the car to get something for me from the boot and then disappear as he slipped over, although he was carrying an open pen knife which was a slight concern as I wasn’t going to get out and patch up a cut or stab wound 😂

It’s amazing how the mindset changes through a race, at Pendeen I realised 30 was out the question and I was only here again to achieve that so what would be the point of carrying on and risking hypothermia, then I remembered how many times I’ve said “I’ve never DNF’d” so you find a way of carrying on. I made a joke of it but quietly hated being told “it’s just over a marathon left, you’re almost there” because for anyone who has run a marathon they’ll know it’s still a way, but for someone who is managing mile by mile a marathon at the end of 75 miles isn’t at all nearly there.

When I closed in on Portreath and I knew I could either take my time and walk it in or pick up a run and spend less time in the dark and rain I dug deep and found a way of moving again and this felt really good and I passed a few people and a few 50 mile runners (The ARC50 happens at the same time) said well done you are looking strong which lifted me loads and helped me make up some time and I made a strong effort to finish in 32.55 despite the ridiculous hill up to the finish which takes 15 minutes to climb ! 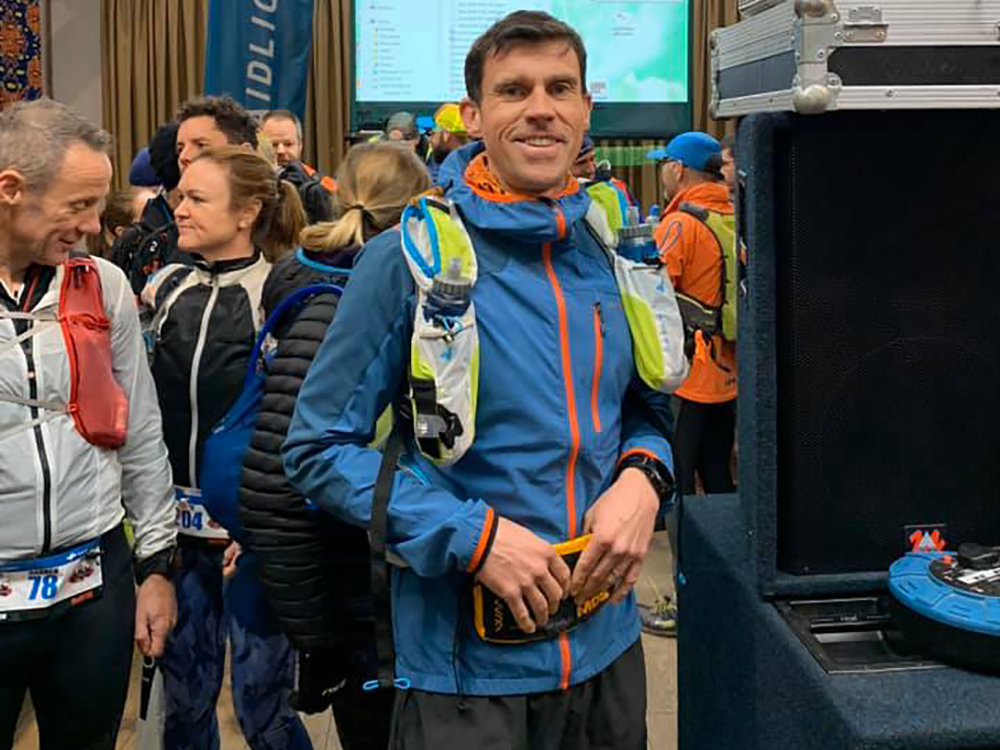 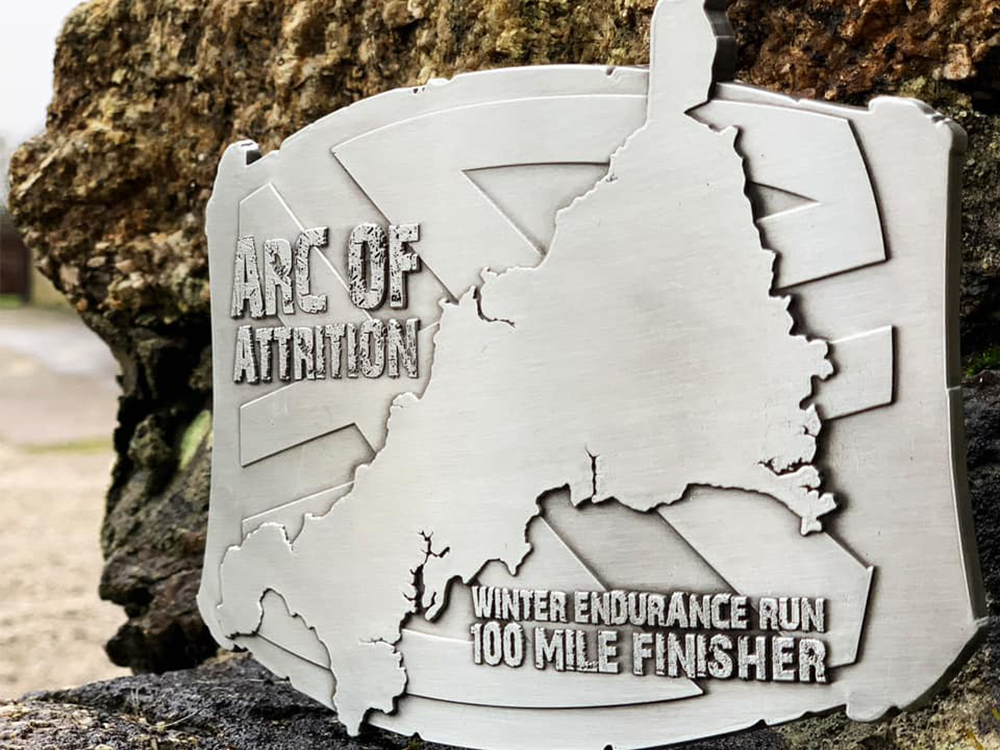 Was great to see many familiar faces and the live coverage of the race by Film My Run was superb, there’s a pre and post race interview of me and all the other runners on You Tube and the Facebook page.

A big thank you to Nick and Daniel, to Andy Jukes and Polly Jukes (if you want a lovely cottage holiday let, speak to these guys. To Nici Griffin for the hug at Marazion (love how Centurion look after their runners even when it’s not their race). To MudCrew and Jane Stephens who did an amazing job all weekend and who managed to entice me back to run it this year. Will I see you again next year 🤷🏻‍♂️ and to all the other runners who I saw and spoke to.

We use cookies to ensure that we give you the best experience on our website. If you continue to use this site we will assume that you are happy with it.I AcceptPrivacy policy